Underwater photography in the Maldives

Almost as soon as the honeymoon in the Maldives was booked, I started working out what I wanted to shoot and what kit I'd need to achieve it. I didn't want a simple underwater point and shoot and instead wanted the same control I had above the waves so I began investigating how I could safely take my Sony A900's underwater with me. Short of finding a spare £5,000 for a dedicated underwater housing, I was going to struggle.

So I did some research and found Canon do some compact cameras with similar controls to DLSRs; you can control shutter speed, aperture and exposure via dials and importantly shoot images in RAW format. I also looked into what equipment I would need aside from camera and case and an underwater flash was by far the most raved about piece of equipment.

Even in the apparently clear seas of the Maldives, small particles float in the water that will reflect any external light back to the source of any light you take to the party. Therefore while the inbuilt flash of the camera would light up the marine life as planned, it would also add lots of unwanted spots of light from the water too. Getting an external flash light that could be positioned away from the lens would help as the particles would reflect in a different direction.

So I came across a diver who was looking to upgrade his kit and agreed to buy all of it for a lump sum. Along with the items I needed above I also recieved some bouyancy weights, a detachable wide angle 'wet' lens and a bracket to hold this dettachable lens. In all I had: 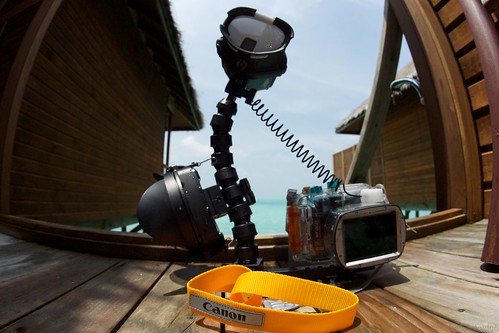 So when we got to the Maldives I could hardly wait to get out and play with it. It's harder than you'd think to get decent images underwater and it was also taking me some time to get used to the limitations of the camera itself. Being used to 24mp DSLRs with full frame sensors I had to get used to the smaller sensor and the comparative limitations of noise in high ISO settings. After several days I began to get the settings right and learn how to shoot properly. Aside from some missed shots of 5ft reef sharks (my biggest regret as they looked stunning) and not as many shots of stingrays in motion as I'd like, I was pretty pleased with the outcomes;

If anyone is interested I can recommend two things:

1. Shoot RAW
The light changes so dramatically by angle to the surface, angle to the sun, depth of camera, depth of subject and distance to subject that to get all the settings right 'in camera' is verging on impossible. Set the lowest ISO you can, the largest file size you can, and shoot!

2. External flash
After RAW post processing, the next most important thing has to be external flash. Even in the great lighting of the Maldives at midday, you need to have additional lighting - and as explained above, this needs to be from a different angle to that of the subject to sensor. On board flash catches all the particles in the water which looks awful while boosting ISO is not an option on compacts after being treated by DSLR sensors for so long! The flash is triggered by the inbuilt flash on the camera, and while it works pretty well, adding an optical cable between the two really helps.

marketing dissertation help(non-registered)
Underwater photography is the only thing that I've been working on with marketing dissertation help and I think that we need to work on it so that it can be good for me. People will know about it and they will think about it.
No comments posted.
Loading...
Subscribe
RSS
Recent Posts
Peak Design bags and Sony FE mount gear (inc. Sony 200-600) My top tips for photography on board a cruise ship HDR images (plus a little bit about Exposure) Artistry through editing Photography; editing photos Travel tripod comparison and recommendation A day in the life...of the world Photography communities and why you should get involved Underwater photography in the Maldives Rita Vitkute & Vilius Kucinas' Maldivian wedding
Keywords
editing Post processing photography optimising darkroom Maldives Meeru 20l 30l Camera bags
Archive
January February March April May June July August September October November December
© Simon Tregidgo
User Agreement
Cancel
Continue